Three years[N 2] after the Birds destroyed Pig City as retribution for the Pigs’ theft of their eggs,[N 3] Red now protects Bird Island from pigs with Chuck and Bomb. The pigs, led by King Leonard Mudbeard, are in a prank war against the birds after Piggy Island is rebuilt. Eventually, a giant ice ball from a nearby island called Eagle Island hits the sea near Piggy Island, forcing the pigs to seek a truce with the birds. Zeta, the leader of Eagle Island, is fed up with her frozen surroundings and wants to occupy the two islands by shooting ice balls from a super-weapon to force their inhabitants to evacuate. Meanwhile, three hatchlings, one of whom is Terence and Matilda’s daughter Zoe, plan to reenact a battle using Zoe’s three egg siblings, but the eggs drift out to sea by accident. They set sail to retrieve them, but a whale blows them into a cloud. They manage to get them down after inflating Zoe into the air only to misplace them again. 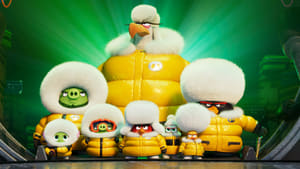